Ed Gallagher emigrated from Burma to Australia as a refugee when he was three years old. Having faced many challenges integrating into a new culture, he used physical education as a platform to assist him in his personal development. Beginning in his teen years, Ed turned to one particular person to help shape his future. That person was Rob Wiley, his health and physical education teacher. Rob not only taught Ed sporting skills but instilled in him important life values including trust, respect, loyalty and discipline. Through Rob’s mentorship, Ed became a passionate person learning lessons that stayed with him throughout his life.

Rob Wiley is a former professional All Australian Football player. Known as a talented player with immense class both on and off the field, Rob was a premiership player with the Perth Football Club and Richmond Football Club. Retiring from the West Coast Eagles in 1987, he continued his career as an assistant coach at the Eagles for almost two decades. He contributed to their 1992, 1994, and 2006 premiership success as a senior assistant coach, skills coach, and kicking coach. Rob has experience in junior development and is well respected within the Australian Football community.

To honor his teacher’s number 2 jersey, Ed is committed to giving back to the community by partnering with his wife Amy, an epidemiologist and health advocate, to launch HOPE 2 Initiative. 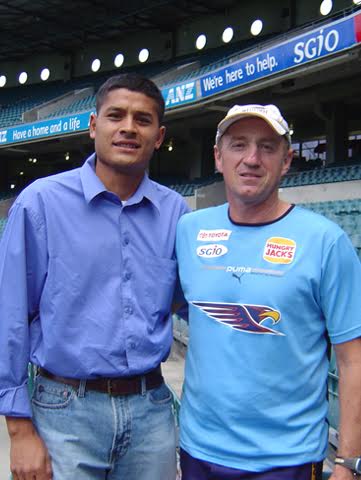